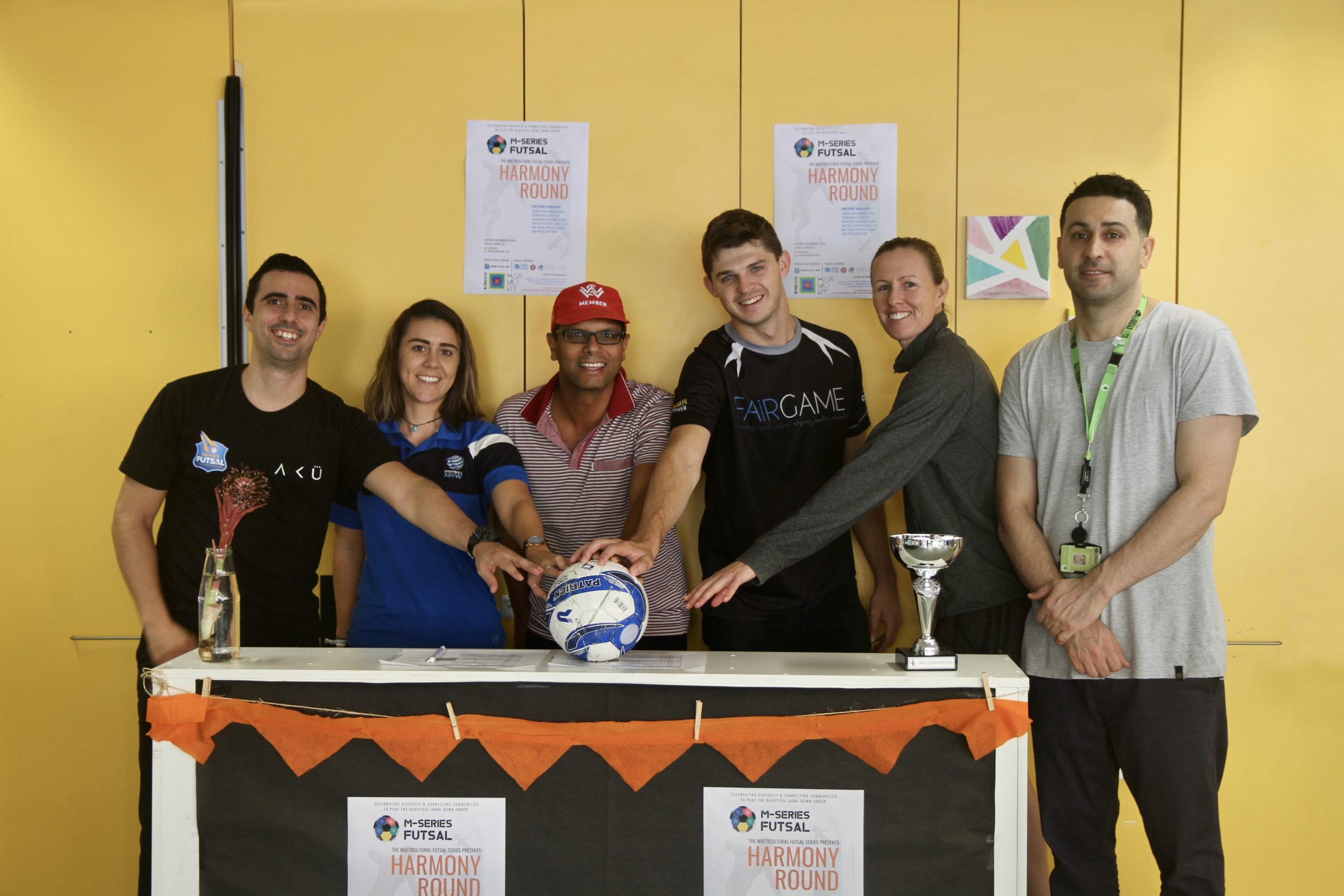 M-Series Harmony Round – Celebrating Diversity, Strengthening Social Cohesion and Connecting Communities to play the World Game Down Under

IMMEDIATE RELEASE: Sunday 24th March 2019 heralds the launch the Multicultural Futsal Series (Or the ‘M-Series’ for short), to be staged at the King George V Recreation Centre in The Rocks, Sydney.

This landmark project will see the hosting of eight one day tournaments over the course of a year that align to key dates in the City of Sydney’s social and cultural calendar including Youth Week, Refugee Week and NAIDOC Week.

A key objective in this multi-faceted project is to provide a platform for newly arrived migrants, their families and communities to build social capital through participating in futsal and football-oriented activities and competitions.

The project is the brainchild of Jarrod Galbraith-Marten, who in consultation with many community leaders, organisations, supporter agencies and individual members from diverse ethnic, religious and cultural groups, identified a need to develop a model of community engagement that enables these groups to enter an environment where they can participate in a sport that they enjoy, celebrate their cultural identity and forge lifelong friendships with members of other ethnic, religious and cultural groups.

An overarching goal of the M-Series is to make newly arrived migrant communities, especially those from refugee backgrounds, feel welcome in Australia and contribute to their integration into society.

The need for this appears no greater than at present, when we bear witness to the devastating impact caused by certain individuals and organisations whose viewpoints and actions run contrary to this sentiment – such as that demonstrated most recently in the most appalling and inhumane terrorist attack in Christchurch, New Zealand.

It is by no coincidence that the ‘M-Series’ takes place at one of Australia’s most iconic locations. The King George V Recreation Centre sits at the feet of The Sydney Harbour Bridge and a stone’s throw from Circular Quay.

The ‘M-Series’ will provide participants the opportunity to use the King George V Recreation Centre as their community hub and gateway to explore and enjoy the best of what Sydney has to offer.

The M-Series collaborators had this to say about their involvement and support of the ‘M-Series’;

‘I feel deeply honoured and privileged to be involved in such a momentous project as the M-Series. I strongly believe it will be hugely beneficial to the communities and sponsor organizations that engage in the project. I see the project as more of a process, a process that will continue to evolve and grow beyond its original scope. My sincere hope is that at some point in the not so distant future complete ownership of the ‘Multicultural Futsal Series’ can be transferred to the communities that it seeks to serve’

‘The M-Series provides an environment of inclusion and acceptance while allowing access to health and education services for Sydney’s newest Australians. Fair Game Australia is grateful to be involved with an opportunity that brings these communities together and can expand each groups capacity.’

‘We have made colossal strides in our understanding of how the brain and body are affected by stress and trauma over the last 15 years. In the context of this learning journey, the importance of physical activity, fun and social connection for good mental health has become increasingly irrefutable. The M-series seems to offer a great package that addresses these three aspects through Football, a medium that has justly been nicknamed “the world game” because of its universal appeal across national borders and cultural and faith divides.’

The first round of the tournament series will be held during the City of Sydney’s Harmony Week on Sunday 24th March 2019. For this first tournament teams will consist members from Afghan Hazara, Tibetan, Burmese Rohingya, Iranian, Iraqi, Syrian and African communities.

SAVE THE DATE: 2021 Refugee Ball – CEO Message and Invitation

Dear friends and supporters, It…

STARTTS is delighted to announce…