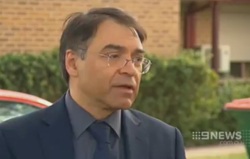 Additionally, the person responsible for the attack has been taken into custody, charged and was refused bail.

It is important to note that the attack had nothing to do with the work we do here at STARTTS with refugees and trauma survivors. Rather, one of our counsellors was the target of the attack for personal reasons unrelated to her work. The other staff member came to her aid during the attack and was injured. The attacker was not a client of STARTTS, in fact they were not a refugee at all.

The team here at STARTTS has come together to support our colleagues who were attacked, and to support each other. Although it was a shocking experience for everyone, the fact that we have a close-knit and caring team has meant that everyone had support if they needed it. We have also been overwhelmed with offers of support from people outside of STARTTS.

Everything at STARTTS is now back to normal. We are seeing clients, working with groups, doing training and undertaking all our normal activities at STARTTS Carramar and all other offices. We would particularly like to thank the officers of the Police and Ambulance services for their great work after the incident, and the team at Liverpool Hospital for taking such good care of our staff members. We would also like to express our heartfelt thanks to all our supporters and stakeholders for their concern and support during a difficult time. It has been incredibly humbling and heart-warming to know that we have such a strong support network around us.

A Message from STARTTS CEO: Our Refugee Ball goes Virtual!

Dear Friends, I hope you…

A Message from STARTTS: COVID-19

I am writing to you…