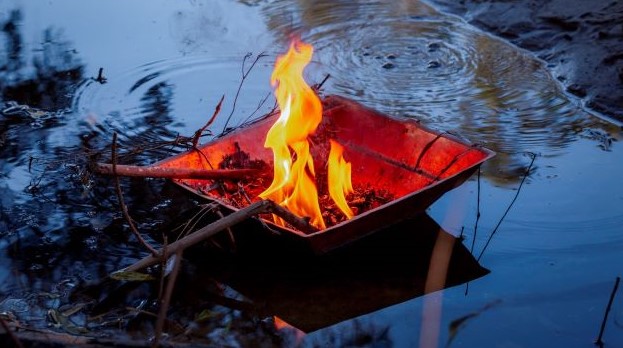 The 23rd Biennale of Sydney (2022) titled rīvus is articulated around a series of conceptual wetlands situated along waterways of the Gadigal, Burramatagal and Cabrogal peoples.

THE RIVER PROJECT conceived by Jiva Parthipan, is one of more than 330 artworks by 89 participants invited to participate in the 2022 edition of the Biennale of Sydney.

As cultural development officer at STARTTS and an advocate for cultural diversity in arts in Australia, Jiva Parthipan’s work mediates artists from diverse emerging communities.

“Too often refugees are told to re-enact their refugee narratives in their art. Whilst this is also important, I believe as future Australians – their cultural practices need to be explored in a nuanced manner with all other communities to redefine Australia and locate them in the centre of arts practice within Australian cultural landscape,” said Jiva Parthipan, co-director of THE RIVER PROJECT.

THE RIVER PROJECT has been commissioned by the Biennale of Sydney with generous support from the Australia Council for the Arts, Create NSW, Crown Resorts Foundation and Packer Family Foundation.

As a river of sustenance in contemporary Australia, the Georges River has multiple living histories. This includes ceremony, ritual and leisure, as ascribed to it by various communities who live near it.

From Indigenous usage and histories, to the baptisms of the Mandaeans, a pre-Christian ethno-religious group from Iraq, through Anglo Australians who use it for leisure and  Hindus, Buddhists and Sikhs who use it for the immersion of cremated ashes and other ritual purposes.

The Mandaeans in Sydney, from a refugee background mostly residing in the Liverpool area, see the river as a reimagining of Yardena, after the River Jordan, whilst for Hindus it is the River Ganga (Ganges) in India it has various significances.

Georges River is the name given to it by British colonisers after King George III.

Using this as a starting point and mediated by contemporary arts practice, THE RIVER PROJECT will engage with Dharug, Mandean, Hindu and Anglo Australian artists and communities to understand the place making traditions along the Georges River.

THE RIVER PROJECT is open to the public for two days only commencing Saturday 4 June and Sunday 5 June from 3–5 pm. Tickets are strictly limited and registration is essential via The Biennale of Sydney

The Dharug component of THE RIVER PROJECT was first developed with artists Venessa Possum (Starzynski) and Corina Norman.

Commissioned by the Biennale of Sydney with generous support from the Australia Council for the Arts and Create NSW.

About the Biennale of Sydney

Since its inception in 1973, the Biennale of Sydney has provided a platform for art and ideas, showcasing the work of nearly 1,900 artists from more than 100 countries. Today it is considered one of the leading international contemporary art events, recognised for commissioning and presenting innovative, thought provoking art from Australia and around the globe.

Established 1988 in Sydney arts@STARTTS is the arts and cultural wing of (NSW Service for the Treatment and Rehabilitation of Torture and Trauma Survivors (STARTTS). arts@STARTTS develops, produces, curates and enables arts practice with refugee communities and artists in partnership with mainstream venues and organisations in Australia.

Jiva Parthipan is a curator, director and community artist based in Sydney and working internationally. Trained in Classical Indian dance, gaining his Masters in Performance from Goldsmith College, London, Jiva was the first male dancer to perform with Shobana Jeyasingh, pioneering British Indian contemporary dance company. Jiva’s multidisciplinary performance works have been seen at Tate Modern; ICA London; International Network for Contemporary Performing Arts, Paris / Dublin; National Review of Live Arts, Glasgow; Performance Space, Sydney; Bone Festival Switzerland; Jomba Festival South Africa to name a few. Since migrating to Australia, credits as creative producer include Handfed, MCA; Little Baghdad with Powerhouse Youth Theatre and the Australian Museum; Dance Africa Dance, Riverside, Parramatta. As cultural development officer at STARTTS in Western Sydney, Jiva‘s work mediates artists from diverse emerging communities. As an advocate for cultural diversity in arts in Australia, Jiva was recently a panellist at the APAC conference and on Radio National’s Big Ideas. He is an alumni of Australia Council’s leadership programme and in 2020 curated PARAI YAH! for the Biennale of Sydney, and co-curated with Nina Miall OLDER THAN LANGUAGE at Salamanca Arts Centre. Stories of Kannagi, a video work creatively produced by Jiva and directed Zanny Begg won the residency prize of the 2020 Blake prize. Previously Jiva was an associate lecturer in performance at Central St Martin’s College, London. Essays about him appear in A Country Too Far published by Penguin Australia and Fiona Kelly McGregor’s essay collection Buried not dead.