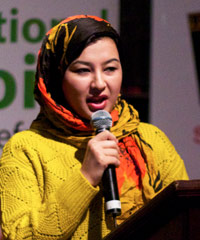 The 2012 Launch of Refugee Week was another successful celebration of the contributions made by refugees to the NSW and Australian community. Over 300 people joined us at the Pitt St Uniting Church for a packed program of activities. Once again, the event was hosted by SBS journalist Yalda Hakim, while in her keynote address Ms Nooria Wazefadost gave a compelling account of her refugee experience. Persian Fusion, a group of Iranian/Kurdish musicians brought together through STARTTS Community Cultural Development project, stunned the crowd with a debut performance of exceptional quality.

Each year, as part of Refugee Week, the Humanitarian Awards are held as an opportunity to acknowledge and thank those who have made an outstanding positive contribution towards refugee issues in NSW.

The Humanitarian Awards also provide a chance to further promote the hard work and achievements of both individuals and organisations in various fields that play a substantial role in improving the lives of refugees.

In 2012, awards were presented in twelve categories. The 2012 Humanitarian Award winners are: 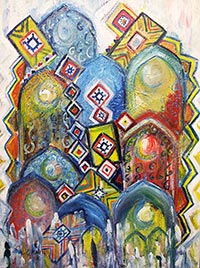 The Exhibition invites the community to share in the experiences and achievements of refugees, celebrating their strength and contribution within the community through diverse and creative artistic expression.

The Exhibition commemorates the life and works of Dario Palermo, founder of the exhibition, and continues his legacy to support future development of refugee artists.

In 2012 the exhibition chronicled 30 years of artistic work by refugees, starting with those who escaped South America in the 1980s through to more recent arrivals, including artists currently in detention. 21 artists from a range of backgrounds participated in the exhibition.

The Australian Refugee Film Festival aims to facilitate the rehabilitation of trauma survivors through creative arts and film projects and to generate awareness of local and international issues related to human rights and refugees. Every year ARFF receives submissions from around the globe from film-makers wanting to highlight the situation of refugees.

A selection of these films – some inspiring, some challenging – was shown at the Launch of Refugee Week. Find out more at www.australianrefugeefilmfestival.org